The Thames Valley is one of the most affluent and productive areas of the EU. In a recent study, productivity per capita was found to be on an average 20% higher than the average rate for the whole of the South East region. The knowledge economy accounts for approximately 30% of employment compared to the national average of 18%  – this skill base, together with its proximity to London, is said to be the driver for this economic region’s wealth.

This flexible office space is located within a HQ-style building on an impressive business park that overlooks the River Thames, the Caversham Lakes, and is just 1 kilometre from Reading town centre.

High-profile neighbours include; Microsoft, Oracle, Shell and Barclays, so clients here are in impressive company. Amenities on the park include the Waterside Nursery and Preschool, and David Lloyd.

The park is just off the A3290 so it links efficiently with the A4, M4, and M25 motorway networks. There is also a free shuttle bus service between the park and Reading train station that runs every 10 minutes (trains to London take 43 minutes and run every 10 minutes too). London Heathrow airport is approximately 50 minutes by both car or train. 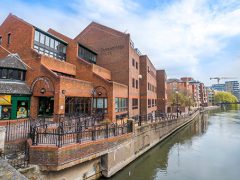