This office space is located in a building on the corner of Cherry Street and Temple Row, overlooking the greenery of Cathedral Square. Office space here is available in a variety of sizes and configurations, with the latest equipment, technology and support services, all on flexible terms.

This business district is in the centre of the city that has recently attracted several high-profile organisations including Deutsche Bank, and HSBC who have 2,500 staff in the city and plan to move a further 1,000 by 2019.  The High-Speed Rail (HS2) scheme is set to set to deliver 15,000 jobs and a £1 billion boost to its economy over the next decade.

Being in the centre of this vibrant city, there are all of the amenities and facilities that you could need on your doorstep, from Caffee Nero 20 metres away, to Louis Vuitton next door, there are many hotels, and also hundreds of restaurants including five Michelin-starred establishments, Adams, being the latest to receive the accolade, just around the corner on Victoria Street.

Birmingham New Street train station is 100 metres away, and Birmingham Airport is 30 minutes away by train, or 20 minutes by car via the M6.

The full address is: 43 Temple Row, Birmingham, B2 5LS 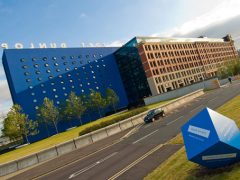 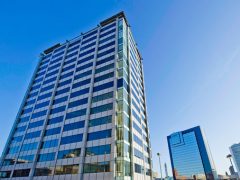